The Origin Of Pillayar Nonbu 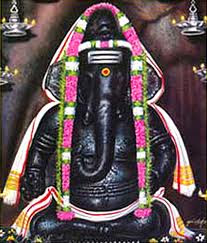 Traditionally we Nagarathars belong to the Saivite branch of Hinduism. Our clan temples are all Saiva temples.

A Nagarathar gentleman of Kaviri Poom Pattinam took a second wife after the death of his first wife who left him a with a daughter. In due course of time the second wife was blessed with a son and daughter of her own and then she started ill-treating her step-daughter.

When the second wife's son came of age they decided to conduct a Karthigai Puthumai ceremony for him.  A Karthigai Pudumai ceremony is like an initiation ceremony for boys in the month of Karthigai.  A similar function for girls called Thiruvathirai is conducted in the month of Markazhi.  On the morning of the Karthigai Pudhumai celebrations the second wife was busy making arrangements for the ceremony.  When she was working with her hands, she felt it would be better to remove the costly diamond ring that she was wearing on one of the fingers.  She removed and left it nearby.  But when she finished and looked for the ring it was missing.  At once she concluded that her step-daughter must be the culprit and started accusing the poor girl in front of all the relatives and guests.  Despite the repeated denials by the girl, everyone taking part in the function started accusing the poor girl. Even her father did not do anything to defend her.

Unable to stand the insults and accusations, the poor girl went without telling anyone to the Margatha Vinayagar Temple in the centre of the town and prostrated before the Maragada Vinayagar and pleaded thus with all her heart and soul - "Oh Margatha Vinayagar, I neither saw nor touched the Diamond ring belonging to my step-mother. But she refuses to believe my words. No one including my own father has raised a finger to defend me.  You know I am innocent.  If you are truly the supreme deity which our Nagarathars worship with such devotion, prove my innocence to all".

The chief priest of the temple was very moved  by the devotion and faith of the distressed girl and assured her that Maragatha Vinayagar will certainly prove her innocence.  He also tried to persuade her to go back home.  But she said in reply "I will not leave this temple until I am proved not guilty. I will neither eat nor sleep until my innocence is established".  Thus saying she began a long period of penance and fasting in the temple, putting all her faith in the Lord Maragatha Vinayagar.  On the first night of her fasting Lord Maragatha Vinayagar appeared in her dreams and bade her thus - "I am very much moved by your devotion and faith.  Commencing from today you must observe a period of fasting and meditation for a period of 21 days.  During this period you must eat but only one meal a day and pray to me wholeheartedly.  On the 21st day your innocence will be established".

The girl started her prayer and fasting at once but did not reveal to anyone about Maragatha Vinayagar appearing in her dream.  Each day of her fasting she took out a thread from her sari, made it into a thread and planted it into dough made with rice flour, jaggery and ghee (maavilakku in Tamil)  and then lighted the thread in front of Lord Maragatha Vinayagar and offered her prayers with great devotion.  Twenty days passed but there was no sign of the lost ring being found.  On the morning of the 21st day she made a vow to Lord Maragatha Vinayagar thus "If by the end of this 21st day the lost ring is not discovered I will surely end my life rather than lead a life of disgrace".

Nagarathars who came to the evening prayer noticed with astonishment a long line of ants emanating from the 21 lighted doughs (maavilakku) used as offerings by the girl to Lord Maragatha Vinayagar.  Everyone became curious and followed the long line of ents starting from the 21 maavilakku to see where it ended.  The long line passed through the temple and streets and finally ended in an ant hole in the girl's house.  When they looked into the ant hole they noticed something bright inside.  When they dug into the hole they were surprised to find the lost diamond ring.  Only then the girl's step-mother remembered that she removed the Diamond ring from her hand and placed it on a stone step near the ant hole to prevent it from being soiled.  It was not so difficult to guess what had happened after that.  The ring had slipped from the stone and had fallen into the ant hole.  The girl's stepmother and father felt very sorry for unjustly accusing the girl.

Note : The above is a brief history of how Pillayar Nonbu originated.  There is no written record about this festival.  The story has been passed down from generation to generation by word of mouth.

Hi just now found out ur blog... its amazing :) that was very informative thanks a lot.. can u plz post about Avvaiyar nonbu(i guess its the name.. heard that the ladies who observe the fast conduct a ceremony on tuesdays at dusk.. no men are allowed... and the ladies cannot crack their knuckles... etc... heard from my distant grandmother(late)... can u plz do a post on that?? thank you :)
Swathy Arunkumar